What do you do when all your favorite shows are off for the summer? You find a million and one new favorite shows to binge-watch in the meantime. I am one of those weird people who can watch and re-watch their favorite shows, but with sites like Netflix, they can suggest awesome new shows every week for me to check out and I am glad they do. I have found a bunch of shows that I just can’t believe I had never seen before now. Check out some of my favorite Summer show obsessions. I will definitely be checking these out when they come back in the fall! 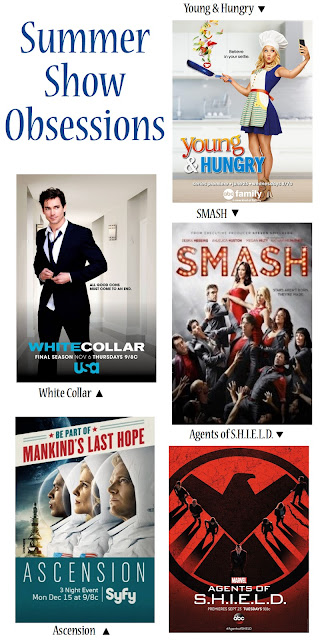 Young & Hungry – If you’re looking for cutesy comedy, Young & Hungry is totally it. It’s light and fun and has a complicated romance story to keep you glued. I also love that it’s focused on a young chef and her food. The first two seasons are streaming on Netflix so now is the time to catch up before season 3.
White Collar // Two words. Matt Bomer. Just hot damn, he’s good looking. He plays a white collar criminal who helps the FBI in exchange for not being in prison. All 6 season are now streaming on Netflix so it’s the perfect thing for summer binge-watching.
SMASH // As someone who loves musical theatre and has spent some time running back and forth behind a stage to be ready for a cue, I absolutely love watching and re-watching Smash. It’s focused on the book conception to broadway stardom dreams of two girls as they compete for the part of Marilyn Monroe in a Marilyn musical. Two seasons are streaming on Amazon prime.
Ascension // This is a weird one, but for all sci-fi lovers, this is a show that you need to see! I can’t even really explain it, but it’s supposed to be about a spaceship that took off in the 60’s with hundreds of people on board traveling to another planet. It’s totally trippy, but I loved watching it. Check it out on Netflix streaming.
Agents of S.H.I.E.L.D. – I loved The Avengers, so I can’t believe I never watched Agents of S.H.I.E.L.D before. It’s basically a weekly dose of crazy gadgets, superheroes and super secret agents. I thought that since it’s a tv show that the production value wouldn’t be as good as The Avengers, but they did such a great job putting the cast together that it’s something I can watch over and over. The first two seasons are on Netflix so you can definitely catch up before season 3 starts in the fall.
Have any shows that you’ve been binge-watching over Summer? Share with me in the comments below!